Hoshana Rabba Made Me A Yid

Hoshana Rabba made me a yid.

Let me try to explain. 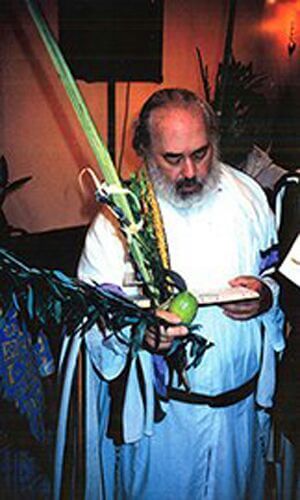 Approximately two years or so after Reb Shlomo ztz’l left this world, my family was visiting the states (we were living at the time in Ra’anana). I was a teenager on a mission – to visit the shul (and home) of the person who was having the most profound impact on my life, R’ Shlomo Carlebach ztz’l. Having never spending any time in Manhattan before, the tall buildings and intensity of the streets of the city didn’t feel so good. I found it nerve-racking. I don’t recall what day of the week it was (other than knowing it wasn’t shabbos), but my day was about to change.
When I found the Carlebach Shul and opened it’s front door, I was immediately transported into a world of longing, longing for something ‘more’, something ‘bigger’ in life. To the right of the lobby was a glass display, showcasing some of the items the shul had for sale. There were some books, pictures, videos and cassettes. I didn’t have a lot of money with me, but was able to purchase a video cassette that caught my eye, a filming of Reb Shlomo’s Hoshana Rabba davening of 1991.

Returning to my cousin’s home in Passaic, NJ, I quickly popped in the video tape into the VCR, and the rest … well, the rest is not just history, it’s also the present and hopefully the future.

I saw a man standing before his creator, conversing with him, and pleading on behalf of the tzibur for sweetness and good news to reach all. Everyone who was present in that minyan was elevated to the consciousness of what being a yid is all about – standing Nochach Pnei Hashem, in the presence of the Master of the World.

Even before Hallel began, hearing the most eloquent nusach for a regular shmone esre of Shacharit captured me. I never heard this tone of prayer before.

As Hallel began, it seemed like a royal orchestra was summoned to play for the King. Mamesh. As simple as that sounds. It was a Hallel that cracked my heart wide open, and continues to do so whenever I see or sing it.
When the Hoshanos began, Yiddishkeit itself took on a completely new meaning. The Tallis way over his head, and the shuckeling of the daled minim reached shamayim while also reaching little me, down here on the aretz. It infiltrated into a place I did not know existed. I never knew it was possible to act like this in this world.
As the Hoshanos ended, a niggun leading to dancing finished off the kaddish, a niggun R’ Shlomo had just composed earlier that year. What was this joy in the room? It the joy of VICTORY, the victory of Tshuvah.

Jump ahead ten years or so later. I was flying back home to Yerushalayim, and a chassidishe yid sat next to me. Somehow the topic of R Shlomo ztz’l popped up in conversation and this is what he tells me.

“I’m sure you know that by us chassidim, Hashana Rabba means being in shul for hours, and not really being with your wife and children for most of the day. Last year I came across a certain video of Reb Shlomo davening Hashana Rabba, and I knew that this year’s Hashana Rabba would be different in my household.” A huge smile appeared on his face as he proceeded to share the following. “I closed all the windows on the house and locked the door. I summoned my whole family around the Shabbos table, and we all got dressed up very kavodic. I somehow found a device to play the video on. We sat around the table, my wife, my children and I, and davened with R’ Shlomo. It was as if we each were davening for the first time.”

American Jewry – How Do I Know I Love You

Becoming People Who Are Ready

Everything in Life is a Bracha

The Chiddush of the Baal Shem Tov

Newsletter – Stay up to date with all the latest news, offers, and exclusive content directly to your inbox.